In 1961 a group of Dutch race enthusiasts came up with the idea of creating an all-Dutch Grand Prix team with the foundation of the “NederlandseRacewagen” after the rules governing engine capacity in F1 were changed from 2.5 litresto 1.5 litres in an attempt to attract more teams.

Sadly not much info is available on the Drebbel F1 attempt.  The only information I found about the project came from the book Autodesign in Nederland by Jan Lammerse(ISBN: 9066303727). The book doesn’t mention the people behind the project or other names such as designers who were related to it, only that they were a group of “Dutch race enthusiasts”.

What is mentioned is that Vredestein would have supplied the tyres for the newly-formed team. The shock absorbers would, ofcourse, be delivered by Koni who had already been established in F1 since the 1950s. Philips would produce some special electronic ignition for the cars whilst Stork or Werkspoor (Werkspoor produced trains back then) were named to produce the chassis. As for the engine, they planned touse a four cylinder water cooled boxer engine, but no companies were mentioned who would build them.

In 1961 the “Autopers” showed some drawings of the Drebbel F1 car and you can see one of them below.  The drawings of the Drebbel would be the last sign of the team though. It became clear to the enthusiasts that the lack of infrastructure and support that was enjoyed by English-based teams would be a major problem for any Dutch F1 team, and the project was abandoned.

For picture’s of the Drebbel and copies of articles check this link. 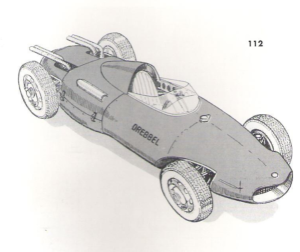 28-01-2018
Today we see a lot of young talent showing excellent skills and drive excellent races however; they probably do not

The Durango Formula one dream