In the 1990’s Tyrrell Racing was not the championship winning team anymore. The team had some sober years during the Turbo era in the 1980’s. We know what happened in 1984 when Tyrrell was the only team to drive with an Atmospheric Engine. 1990 would be the last “top” year for the Tyrrell team when Jean Alesi scored twice a podium. The following years Tyrrell had to survive in the Formula One. Until Paul Stoddart arrived at Tyrrell in 1997 and offered with his, company European Aviation a brand new future for Tyrrell.

11 September 1997 the Tyrrell team, together with Paul Stoddart, published a press map with their plans for the future. With the Title Tyrrell 2000 “RACING TOWARDS THE MILLENIUM”. In the letters is written, “The Tyrrell Formula 1 Team received a Multi-million pound boost this week with the confirmation of a major joint-venture with team sponsor European Aviation, to build a new State-of-the-art wind tunnel facility in the airline’s base at Bournemouth international Airport”.  The plan was that the wind tunnel would be on-line in February 1998.  It would mean that Tyrrell had for the first time their own facilities to test mock ups of their new cars and updates they want to bring to the cars.

Paul Stoddart’s company, European Aviation, would use the wind tunnel or the development for the new “Hush Kits”, better-said engine exhaust silencers, for the new noise regulations in aviation that would be introduced in April 2002. The rest of the articles in the press map Tyrrell released is mostly a PR talk, many pages are about the history of the usage of wind tunnels in the Formula One, and the invisible force of wind, which in combination with the correct aerodynamics, make a Formula One car faster. All told by Dr Harvey Postlethwaite.

When you read between the lines, you see the true story the Tyrrell team tries to tell you.  Besides the strong partner they found in European Aviation, Paul flew the team to all the Grand Prix in 1997 to start with; you read the power the team gained after the plans were made to build their own wind tunnel in Bournemouth. The future seemed to be very bright for the team. In addition, an impression was made of the new facilities, as seen below, to stimulate the capability of the team to be at the top again around the millennium. 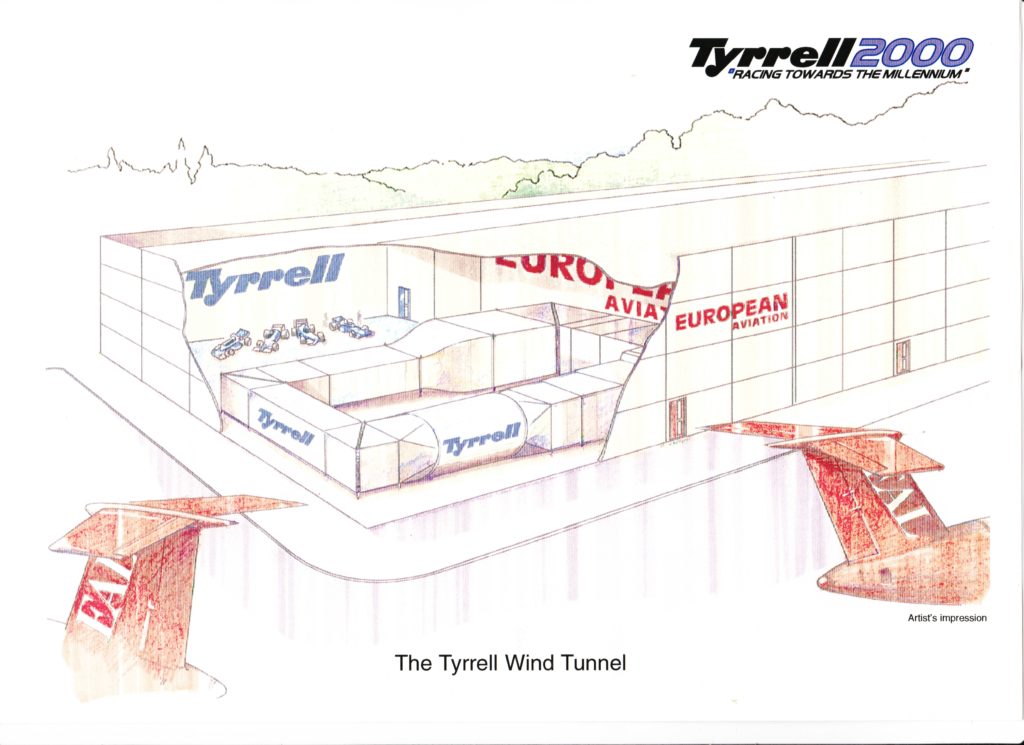 Sadly, as I have written previously in Paul Stoddart’s attempts to enter the F1 before Minardi, the amazing efforts both Ken Tyrrell and Stoddart made where useless. On the horizon, BAT appeared with big money but mostly with big bullshit talk that they would be a new winning team.  We saw how “great” BAR racing was during the years Villeneuve was their first driver. BAR only bought the rights from the Tyrrell team, not the cars, not the equipment, not even a single stapler.  Paul Stoddart however bought the cars and the equipment from the team.

I think the previous employees of Tyrrell can be still happy. After BAR bought the team, which was sold to Honda Racing, which also failed to make a winning team of it and sold the team to Ross Brawn. Brawn GP won 8 races in 2009. And won both championships. Who does not remembers Jenson Button’s race in Monaco? At the end of the race he forgot where to go to he was so excited. A year later, the team was sold to Mercedes who brought Michael Schumacher back to the Formula One in 2010. A few years later the Mercedes team would be dominant, and they still are!

24-10-202124-10-2021
Stand-in drivers, the drivers we mostly forget about though play sometimes a huge roll for teams. They are often at
Debunked Projects

The stillborn Orange Arrows A24 was just a myth

One thought on “Tyrrell “Racing towards the Millennium””

Were small teams like Forti Corse really that bad?

Unraced projects of the 1951 season