Yes the title seems to tell this is a article written by an critical Formula One journalist with a different view on what happened with the Lola Mastercard Formula one Team in 1997. The team went bankrupt after the Brazilian Grand Prix, where the T97/30 stayed in the pit box. Eric Broadley knew it was too early to enter the Formula One, but he had no other option to deploy his untested Lola T97/30 under the pressure of its main sponsor Mastercard.

We go back to April 1997, twenty years ago the Lola F1 Team arrived at Brazilian track after a disastrous Formula One weekend in Australia, the team failed to qualify with Ricardo Rosset and Vincenzo Sospiri behind the wheel of the Lola. After the Australian Grand Prix Lola went back to England to review the data and make so additions to the car. Eventually they tested with the T97/30 at Silverstone. The test showed that the additions and improvements on the car worked. The car was a few seconds quicker. But still slow compared to Minardi or Tyrrell. 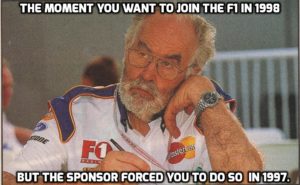 Lola Mastercard travelled to the Brazilian track with some fresh energy. While the team entered the circuit, the rumours of a breakup between Lola and Mastercard circulated in the Paddock. Due the poor results and performance of the Lola T97/30 and the lack of correct management within the team.  The mainstream media and so called people with F1 know how pointed the finger to Eric Broadley, he was the one to blame, because he had the vision to enter the Formula One with Lola once again. Also the penned Lola T97/30 that was badly tested and basically a upgraded Lola T95/30 from a few years before. Allan McNish tested in 1995 with this car.

This is what sport journalists wrote and said in the papers and television, I don’t agree with their understanding of the collapsed Lola Team. In my opinion the media was too hard with its opinion and views towards Eric Broadley, he didn’t deserve it at all. The planning was to debut the Lola Team in 1998 during the first Grand Prix of the season. In this case the team had enough time to design and develop their Formula One car, probably named T98/30, so the car would have been a reasonable car which could compete with teams as Sauber and Stewart.  Not mentioning the time they would have to find a big main sponsor for their team.

But Eric Broadley found in Mastercard a new Main sponsor for Lola.  Mastercard is known as one of the biggest credit companies, and you would assume the company has plenty of money to be a main sponsor for a team.  It seemed Lola F1 had a bright future in front of them… well it seemed.  Mastercard’s idea to gain money for the team was to sell special Formula One packages for their own customers and shareholders. There were several packages available in different price categories. The more you paid the more you get.  To be honest I don’t understand why Mastercard choose for this option to gain money.  Lola was forced to design their Formula One car for the 1997 season. This meant that the T97/30 was based on the T95/30 a test hack from Lola tested by Allan McNish.
The T95/30 was a in between F1 car. The FIA announced several safety rules and aspect due the terrible weekend at Imola  in 1994. Ayrton Senna and Roland Ratzenberger lost their lives that weekend.

In February 1997 the Lola T97/30 was quickly tested on the Santa Pod strip before the cars were transported to Albert Park, to attend the first Grand Prix of 1997. After the first practice it was clear that the Lola was a horrible car to drive, with a low maximum speed and an awful aerodynamic package. To make it even worse Ricardo Rosset parked the Lola almost in the Pitwall during a spin. During the qualification on Saturday the team failed to stay within the 107% rule and could pack their bags and go back home to do some serious homework. As mentioned the team started to improve the car bit by bit, during the test sessions at Silverstone the progression was visible, sadly still not enough. After the testing the team went to the Brazilian Grand Prix, the rumours stated that Lola would lose Mastercard as their Main Sponsor due the bad results and management. The Lola pit box kept closed on the Autódromo José Carlos Pace pits.  The team packed the cars and their equipment and left the circuit. Mastercard blamed the team, and probably pointing mostly to Eric Broadley, of the failed cooperation between them and Lola.

In this case it seems Mastercard is the one to blame, of course Eric Broadley could have done a bit more, but the pressure Mastercard put on the Lola F1 crew to design and build a new Formula One car in such a short period of time was simply too much and doomed to fail. Mastercard would become a sponsor of the Jordan F1 team, this time just a sub sponsor. Jordan had a reliable main sponsor in Tobacco giant Benson & Hedges.

The aftermath for Lola was disastrous, although the Lola F1 Team was not part of the Lola group, it affected the Lola Group badly financially as their reputation.  Eric Broadley’s reputation was destroyed because of Lola’s Formula One adventure.  The media blamed him for the failure and said that Eric Broadley was too old to lead a Formula One team and create the car. Entering the Formula One with Lola once more was Broadley’s last dream.  However Twelve years later Lola did a bid on one of the 2010 grid places with the Lola-Cosworth B10/30. Lola showed a mock-up of the design, and it looked promising. But we know what happened. The FIA choose for Campos Meta 1, USF1, Lotus and Virgin. All teams disappeared. I don’t assume the Lola name will return to the Formula One. But you can never be sure, these days it’s strongly rumoured that the Brabham name will return to the F1 Grid… Time will tell!

Goodbye Bernie Ecclestone, you will be missed.

Phoenix Grand Prix team; The Phoenix that did not rise from its ashes

The Formula 1 returns to San Marino!

A big thank you to all my followers and fans!