There was a time when Formula One games where not all about fancy arcade racing and perfect graphics. But all about modding and the best setup for your car to get the best results on the track, to play online to others and see you have the complete wrong setup and lose your temper and start to race offline against the AI’s. Those days are long gone but for many these are the golden age of Formula One gaming. Let’s take you back on a trip to memory lane to the 2000s. Welcome EA Sports and Geoff Crammond!

Formula One gaming in 2000, Geoff Crammond came with Grand Prix 3, the successor of Grand Prix 2 , which included all the cars and tracks of the 1998 Formula One season. But there was no Jacques Villeneuve included he felt himself to bad ass to be in the game. So he got replaced by fictional drivers John Newhouse who did a good job if you ask me. The game was known for its amazing graphics, physics and the crashes you could end up in. People who played GP3 in the past know how realistic those crashed where, basically everything could be destroyed. Who didn’t reconstructed the ’98 start crash at Spa? A year later MicroProse came with the official add-on for the game named GP3-2000 which updated the game to the 2000 season. However during that time there was already a big modding community who created many seasons including a 2000 season. There were several modding communications active, one of the modding groups was EMACF1, which created many mods for many F1 season for GP3 and fo GP3-2000. 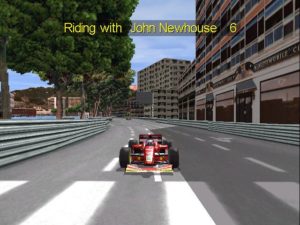 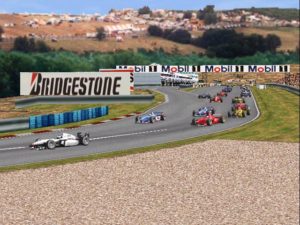 There was one problem with Grand Prix 3 the game was hard to play because of the setups of the cars and the fact that you couldn’t use the arrows keys to drive if you didn’t had a steering wheel for the PC. For me as a 10year old back then a big issue.  In the summer of 2000 EA Sports came with F1 2000, a game based on the current season with all cars, Tracks and drivers yes also with Jacques Villeneuve… The game caught my attention because I could drive with my favourite driver Jos Verstappen and the game was also available in my native language. While the game was a good product there were some mayor issues with the game which EA Sports seemed not be able to fix. Because of this EA Sports came with a brand new game “F1 Championship Season 2000” basically it was a upgrade of F1 2000. The game was more smoothly and the gameplay more realistic. Though the game never got successful. F1 2000 kept popular under a big group of players.  Who kept on developing new mods and tracks for the game. F12000downloads was a good example. 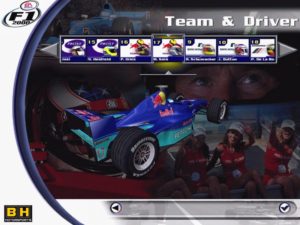 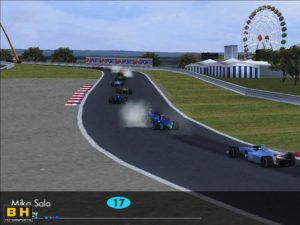 EA Sports knew their previous game F12000 wasn’t the perfect game, and F1 Championship 2000 not the success the hoped it would be, they had to do something else with the Formula One Gaming. And they came with F1 2001 for the PC. The game  came with a brand new gaming engine and a much more realistic behaviour of the cars, more realistic tracks, and they basically opened the game for the developers better known as modders to create their own seasons and content. I’m not saying F1 2001 was the best game, there have been 2 mayor updates released back then, but it was the first step for many Race Game designers. Groups as Simbin, EMACF1, SBDT and so on made their first quality mods for the games.  One of the best non Formula One  mods was the FIAGT mod by SBDT. They allowed you to drive the FIA GT Series of 2001 and the physics and the graphics of the cars where amazingly incredible. While many mods where announced for F1 2001 Geoff Crammond announced Grand Prix 4 it would be the last F1game in the Grand Prix series by MicroProse. Grand Prix 4 would be a state of art a game, a one of a kind, a piece of heaven. 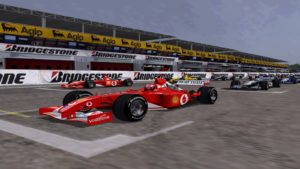 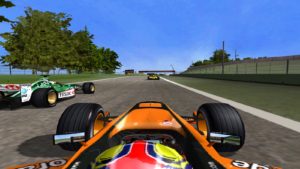 Formula One Gaming would reach with Grand Prix 4 and the announcement of F1 2002 by EA Sport the golden era as we call it now. Grand Prix 4 came in 2002 and was based on the 2001 season with all the cars, drivers and tracks of the season. The first impression I had from GP4 was Wow…. What is this amazing game?  My own gaming computer back then wasn’t able to play GP4 on full details  and wasn’t able to render all the cars properly. Many had the problem when they bought the game. Geoff Crammond created with its team a brand new engine for the game that produced graphics so realistic that many of us were not able to play the game on full but had to play it on medium or even low setting. Because of this problem EA’s F1 2002 had a vantage due the game used the same engine as F1 2001. However GP4 was a lovely game to play, even on low settings, if you used a wheel during gaming, and you were able to have the perfect setup in the game the handling of the car was amazing. This together with the surroundings and the updates and mods who got created the game was perfect. The best in game feature was the pitcrew that actually moved and worked realistic on your car. When you left the pitbox the man in front walked out of the pit box to give you the sign to leave. Sadly Geoff Crammond already lost the license for a new game, the FIA asked way to much, and there wouldn’t be a Grand Prix 5. 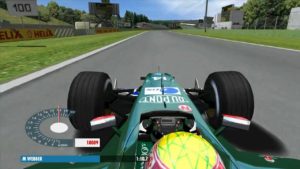 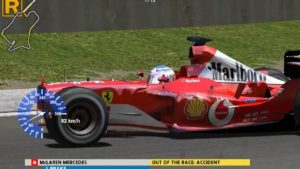 While GP4 was in the beginning for many gamers a game that was too big, EA came with F1 2002. The game was similar to F1 2001 but completely new. This gave a boost for the Formula One Gaming The menus of the game where easier and the graphics where improved, the cars looked smoothly but not that detailed. The game was able to be played on almost any computer. Soon the modders from F1 2001 went to F1 2002. The Formula One Gaming community would be spoiled with lots of updates and mods from the modders. The same year a lot of mods where announced and released one of the best was GTR2002 which received many add-ons and updates. It was basically a new game based on F1 2002. During the F1 2002 hype the F1 communities such as M4driving, Racesimulations, BHMotorsports, RSC where booming and many people got involved in online racing and started to make their own updates.  Me and a friend of mine got also infected with the modding virus and we started to create a couple of cars before we decided to create the F1 2004 mod. But when we created the mod most of the modders left for what we can call the ultimate game F1C 99-02. 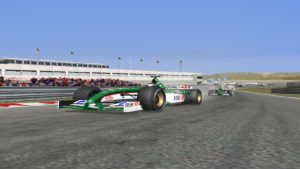 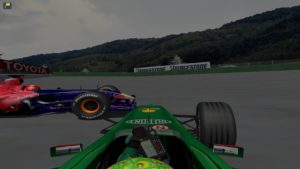 EA Sports announced the game in 2002  the game would be a multiple season game which had a career modus (which didn’t work properly) and asked the community to create lots of seasons for the game Formula One but also other Formula series and touring and endurance series. EA failed to get the license for the 2003 season, but they still had the licence for the 1999 till 2002 season.  The game was very plain in the beginning but the graphics where good. All the tracks, cars, drivers of the four Formula One season where in the game. The AI of the cars was also improved  in the previous game F1 2002 the AI of the other cars could be a disaster with cars crashing or slowing down on a straight part of the track while they should go full throttle .  Many Formula One seasons and other motorsport series got created for F1C in favour of the Formula One Gaming community. The golden era of F1Challenge 99-02 was between 2003 and 2006 when CTDP and RH, at that time the top of Formula One mods, came every year with new mods.  There where also smaller modding groups as TDG who announced their 1994 season, their previews looked amazing and I was one of the lucky once who was able to drive with some cars in a demo. One of the leading modding groups SimBin left the modding community to start their own Gaming Studio. They released their first game in 2004, with GTR one of the best GT games ever made. While F1C was a big hit and F1Seven came with a “full” 1970s mods the first cracks came in the Formula One Gaming community. 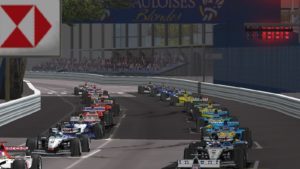 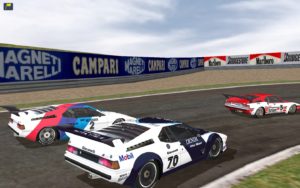 RH was one of the first who came with a black list because modders started to “leech” their work for their mods they created. This caused a lot of Rumor and people started to look at the new mods If they could find any trace of other mods. On communities such as Racesimulations.com where you could also download mods and updates for the games people started to get irritated and blamed each other for many things. Because of the leeching problem. During these days rFactor was announced as one of the games where many mods would appear on. Some modders left F1C for rFactor because the leeching problem would be less. This happened but the fact that you had to pay for updates people stayed with F1C.  A new kind of community came to the surface. The big mod teams as RH and CTDP left F1C and new modders came to the surface. People as Luigi got a lot of credits for their 1960’s and 1970’s mods. However the scene was already loosing it’s fans mostly because people got older and lost interest in gaming due their life, and the game got older. 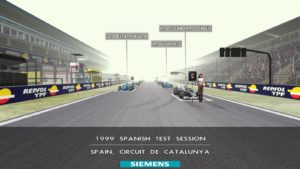 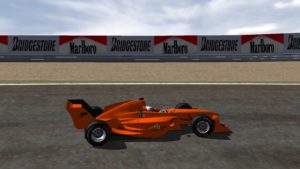 There  is still a active modding community for GP3, GP4 and F1C. Even for GP2 there is still an active modding and gaming community. So If you feel like to play the games again try one of the new mods I would say!  For F1C is a mod that represents almost all Formula season. The mod is called F1Challenge VB 2017.
And for those who miss the old times I still had a lot of mods cars etc for many games back then and uploaded them to my Mega account so the heritage of these games would kept alive! Many files for the games but also other old racing games are still available at the old HSW FTP server.

Goodbye, my love, Goodbye Formula One

Pirelli to stay as supplier until 2023

Energy drinks in the Formula 1

One thought on “Formula One gaming in the 2000s”

Unraced projects of the 1968 season