During the 1950s many British teams tried their luck in Formula One. Back then it was quite easy, if you had the money of course, to enter Formula One.  One man who did was Tony Vandervell who entered F1 in 1954 with his own Grand Prix cars. The Vanwall team would win the inaugural Constructors’ Championship in 1958 with Stirling Moss, Tony Brooks and Stuart Lewis-Evans driving.

The team would enter a handful of races over the next two seasons but couldn’t compete against the new generation of rear-engined Formula One cars. Tony Vandervell decided to retire the Vanwall team from racing. Vandervell continued his own business Vandervell Products, making Thin-Wall bearings at his own factory in Acton but with no further interest in any form of motorsport.

During the 1970s and 80s the Vanwall cars were regular competitors during Historical Grand Prix weekends. There were even reunions with former Vanwall drivers and mechanics but no news about an eventual return of the team in Formula One.  That is, until the 26th June 1995 when the first news appeared of “strange rumours” regarding a revival of the Vanwall team. At that time it was not clear if the Vandervell family was behind the idea of reviving the team or that the rights to the name had been sold to an investment group interested in joining Formula One. Later it would emerge that the British engineering giant GKN had bought the rights to the Vanwall name and had recruited Mike Earl as team manager. 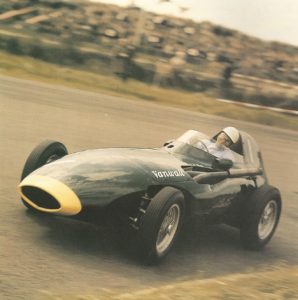 It was rumoured that the team’s main sponsor would be Coca-Cola and that they already secured a factory deal for Ford V8 engines or for the V10 engines which would be pitched by Hertz. However Ford countered this by announcing they had not been contacted for an eventual supply of engines. Nigel Mansell was believed to be one of the drivers while the most interesting rumour was the choice of tyres. Dunlop was rumoured to supply the Vanwall team with rubber.

However it would soon become clear that a revival of the team would not be happening under GKN. Two years later MotorSport Magazine published an article about another attempt to revive the Vanwall Team in F1. This time the Vanwall name had been bought by the VF One company. The idea was to bring the team back and to compete in the 1999 season. VF One’s managers explained they were in serious negotiations with companies in the United States and the Middle East for financial backing, while there were talks with British chassis designers and engine suppliers.

John Minet and David Laird, the men behind VF One, recognised the enormity of the task. “Our aim is to re-establish Vanwall with an infrastructure comparable with the best in the sport,” said Minet, “but our philosophy has been that it will be done properly, or not at all.”

Following this news, nothing was heard from John Minet or David Laird about the revival of Vanwall in Formula One. When the FIA opened the bidding for applications to compete in 2010 there were low-level rumours about Vanwall placing a bid to be on the grid. However these rumours left as quick as they came.

For more articles check this link.

Unraced projects of the 1995 season

Unraced projects of the 1958 season