The AGS JH26 was supposed to be the AGS team’s new Formula one car for the 1991 season. However at the end of 1990 all was not well with the small French team. Rumours suggested that AGS was bankrupt and wouldn’t enter the 1991 season at all. But the team managed to scrape together enough money to enter for 1991, a season full of rumours, gossip and a desperate team boss asking the French courts for protection against creditors.

At the end of 1990 it seemed that AGS was a team that would no longer be gracing the F1 grid. There was no money left to even pay outstanding cheques. But the small team was working on a new car, the AGS JH26, penned by Michel Costa. The design of the car began during the 1990 season, and initially looked promising. The wind tunnel model that was tested several times showed great improvements and had a high nose, like Tyrrell had introduced earlier on their 019 chassis. At one point during its development the car bore a resemblance to the Benetton B192, which itself was designed a year later. Coincidence?
The stillborn AGS JH26 could have been the solution for the team to gain more attention, secure new sponsors and possibly score points. But this is only speculation. Only the monocoque would be made for the JH26. 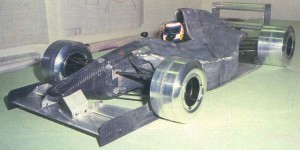 During this turbulent period team owner Cyril de Rouvre had been negotiating with Gerard Larrousse to merge the AGS and Larrousse teams. The idea was that both teams were having a hard time in Formula One finding financial partners and sponsors, and combining the two teams would give them a better chance at this. However, AGS team manager Henri Cochin was working independently to find money for the AGS team so that they could at least start the 1991 season.

The team were able to enter the first two races and at that time Gabriele Tarquini and veteran Stefan Johansson were the drivers for AGS. Impressively, Tarquini was able to qualify the old JH25 for both races at Phoenix and Interlagos. Shortly after the Brazilian Grand Prix though, the team collapsed. Immediately Cyril de Rouvre asked the courts in France to have his team placed under financial control (receivership).
But against this it appeared AGS was once again saved. The Italians Gabriele Rafanelli and Patricio Cantu, both active in F3000, took over the AGS team. The new owners decided that the JH26 would be scrapped and that Michel Costa would be replaced with Christian Vanderpleyn. Vanderpleyn, who had worked for AGS from its earliest days until the takeover by de Rouvre, concentrated on the development of the old JH25, which became the JH25B. But as well as this, the new JH27 was at the point of being designed and created. The design work started in May and the JH27 would make its debut during pre-qualifying at Monza. During this period the new Italian management of the AGS team came up with a long-term financial plan that would take up to seven years to restore stability and health to the team. Due to this plan the team were able free themselves from the French courts’ financial control.
The team worked non-stop on building up the JH27 for Monza and were shocked when Tarquini did not return from his first lap with the new car. His engine had cut out.

After the Spanish Grand Prix there was one more attempt to merge the AGS team with Larrousse, but at that point Larrousse were in a much better position and the talks came to nothing. AGS missed the last two rounds of the year and left Formula One for good.

For picture’s of the stillborn JH26 check this link.

Team Haas and their preparation for 1987

Unraced Projects of the 1991 season

Overview Formula One Testing In 1995

Overview Formula One Testing In 1994