Sometimes there are new teams entering Formula One which are not really new at all. Jackie Stewart’s Stewart Grand Prix team was a good example, a hidden secret which we will reveal now. The origins of Stewart go way back to 1994 when Japanese driver Tetsu Ikuzawa started his own Formula One project, in which he planned to enter the championship by 1998. But as time went by, the team would become Stewart Grand Prix, now better known as Red Bull Racing!

In early 1994 Tetsu Ikuzawa, a former Japanese Formula 2 and Formula 3 driver from the 1970s, and successful businessman, started his own Formula One project with the intention to enter the sport during the period of 1996-98. During the early days Tetsu recruited former Williams team manager Peter Windsor and he would help begin the Ikuzawa project. The two men began the search for a designer and engineering director to produce their Formula One car, which led them to designer Enrique Scalabroni. Scalabroni already had a good reputation as a designer with Williams, Ferrari and Lotus, and as a designer who dared to think out of the box – in 1993 he drew up his revolutionary idea of a future Formula One car.

Together they started to design the HW001 during the 1994 and 1995 seasons at the Hawtal Whiting company, located in England. The Ikuzawa F1 Team tested their design for hundreds of hours in the windtunnel, before they ended up with a full-scale mock-up of their HW001 chassis. Later in 1995 John Watson did a couple of seat fitting tests for the team. The plans were serious at that time to enter Formula One.

The team also intended to hire two drivers; the first would have been Kenny Bräck and the second Gil de Ferran. Their line up looked promising, their car looked great and the windtunnel testing had delivered promising results. As various pieces of the puzzle fell into place both Tetsu and Peter were talking extensively to Ford and Cosworth to negotiate an engine deal.

Ikuzawa had come far but due to the mid-90s slump in the Japanese economy the team encountered financial trouble and saw many of the key people they’d hired move away to the newly-founded Stewart Grand Prix team led by Jackie and Paul Stewart. Not long after information first surfaced about the Ikuzawa project stalling due to the economic problems in Japan then rumours emerged that the Stewart team was to buy the Ikuzawa HW001 design. Stewart denied these rumours, but the team had already hired many of the people who had worked on the HW001, so even if they didn’t buy the design, similarities were inevitable. Later on Stewart would go one better than Ikuzawa, concluding a deal with Ford to supply his team exclusively with the newest Ford engines for the 1997 season.

Peter told us the follow about this deal.
“Another factor that hurt us a little was the Ford engine contract going to Jackie Stewart. He deserved it, of course, but we were talking extensively to Ford and Cosworth back in 1994-95.” 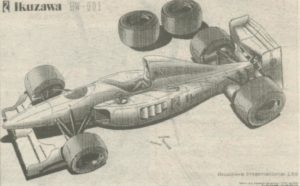 The SF01 from Stewart proved itself as a reliable car. What if the Ikuzawa project hadn’t been halted due to financial issues and had instead succeeded in getting the HW001 car on the grid with Bräck and de Ferran as drivers? We will never know. But this story is an amazing one. How a dream ended up in 2017 as the Red Bull Racing team.

I want to thank Peter Windsor and Enrique Scalabroni in person for their cooperation in assisting with the story about the Ikuzawa HW001, without their information this story wouldn’t be complete

For more pictures of the car check this link.

Paul Stoddart attempts to enter the F1 before Minardi

31-07-201720-03-2018
Paul Stoddart is a well-known person in the Formula one paddock. Previously as Minardi Team Boss and more recently he
Minardi

Drivers who almost moved towards minardi

2 thoughts on “Ikuzawa; the team that became Stewart Grand Prix”

What will they do if another bomb drops?

Unraced Projects of the 1996 season