Dear Bernie Ecclestone,  this blog is dedicated to you. A person who has been working in the Formula One for more than 60 years, 6 decades of Bernie in the Formula One WOW how did you do that Bernie ? You tried to qualify yourself for the Monaco Grand Prix in 1958, before you started to be a manager for drivers. To end up as a team boss and later on Mister Formula One.

I remember myself sitting on the couch, in my Benetton team Shirt, as a 4 year old boy next to my dad watching the 1994 Hungarian Grand Prix. Where Jos Verstappen, my all-time Hero, managed to finish as 3th! I remember the excitement my dad and I had at that Sunday. Verstappen on the Podium WOW!  And a feeling inside me says thanks to Bernie Ecclestone we could have a taste of what it was to end up on the podium. Twenty-two years later his son Max would win the Spanish Grand Prix. You words for Max where priceless. It showed how much you love Formula One, and how much passion you have for this sport.

This sport took one of your closest friends, Jochen Rindt died after a horrible crash at Monza. You decided you didn’t want to be a drivers manager again and decided it was time to become a team boss. Something you did with huge success. You became the owner of the Brabham F1 Team and we all know what happened. Twice World Champion with amazing drivers. 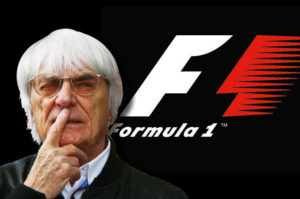 However this is now how I see you. I see you as the little guy who made Formula One big with all his passion and compassion. What everyone seems to forgotten is that you bought in the 70’s once the commercial rights for the Formula One. And offered every single team to take a share in them. However the team refused it due the millions sponsors gave. Years later the teams understood they choose wrong and started to blame you.

I always loved it how you kept in power in the Formula One and how you let the Formula One grow to what it is now. With all your passion and love for this amazing sport. I have always been the outsider in discussions about Formula One. I never agreed with the public opinion and did my own research, many people call me still the walking Formula One encyclopaedia . Remember you even helped me once when I needed information about a Formula One team? You gave me the information. Now I know for many you are unreachable, I was just the lucky guy.

Chase Carey will be the new CEO… I never heard of this guy, no one did because he has not the Passion, the Love, the emotional connection you have with the Formula One Bernie. For me you will always be “Mister Formula One” and this is something that will never change. Thanks for these amazing years. Thanks for all the joy, controversy, amazing races and your zero fucks given mentality.
You will be missed Sir !

I want to believe: The return of Bernie and Brabham

16-01-2018
It seems last year during the summer period I have been sleeping, or partying too much of course. There were
F1 Rumours News

15-06-201815-06-2018
What is going in with Force India? We know the team is financially struggling and that the team is looking
Debunked Projects

The Day Schumacher Drove a Ligier