The 1992 season in Formula One can be seen as an interesting year. Many teams were trying to qualify their cars and a couple of these teams wouldn’t complete the season. All the while there were many rumours circulating about teams being bought. This is the story of the Brabham team which collapsed after the Hungarian Grand Prix and which was almost taken over by Galmer Engineering. Team Brabham Galmer was a reality, for a couple of months.

First of all I want to thank Alan Mertens from Galmer Engineering and Andy Brown, a former employee of Galmer, for their information about the Brabham Galmer project. Without their input I would not have been able to write this story.

It was 18 September 1992, a couple weeks after their final Grand Prix, when Brabham confirmed that it had officially withdrawn from the World Championship. It didn’t take long for rumours to emerge speculating that Galmer Engineering, led by Alan Mertens, were about to take over the Brabham team. Exactly a month after the Brabham team announced their retirement some sections of the motorsport press published news about these developments. Brabham Galmer would be the name of the reformed team, and Mexican Indycar driver Carlos Guerrero was listed as one of the team’s drivers for 1993. But by January Alan Mertens revealed to the media that the takeover plans had been halted due to financial problems. 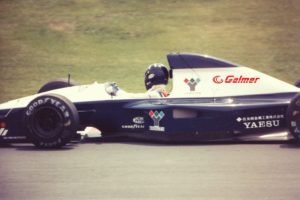 However this is not the complete story of the Brabham Galmer team. The story appears to be more sinister than many know. In Brabham’s final days two supposedly wealthy businessmen bought the team’s assets with a plan to relaunch Brabham back into Formula One and with a brand new car penned by Alan Mertens. At the time, they could have also bought a team such as Ligier, which was available as Guy Ligier looked to exit the sport, but as it would transpire, Brabham’s purchasers were not wealthy at all.
Nevertheless, the new Brabham Galmer team was born. The Brabham BT60Bs were sent to Galmer Engineering to be evaluated and used to allow the new BT61 car to be based on the BT60 design. Meanwhile Galmer negotiated a contract which required the team’s investors to pay Galmer $500,000 to begin the work.

Alan told me they sent the investors the invoice for the money but they were never paid. And then the Inland Revenue came knocking. To quote Alan,
“Sometime later the Inland Revenue turned up in March accusing me of fraud. The two men had claimed tax relief against the payment and the Inland Revenue wanted to know why I hadn’t declared the sum as revenue during the course of the previous year.”

After showing that he’d never received the payment, the fraud accusations were dropped. Brabham Galmer was still alive, but it was virtually impossible to inject any investment into the car and have the old Brabham BT60Bs prepared for the 1993 season. Had this been successful, the 1993 cars would have been designated BT60Cs.
Galmer attempted to keep the cars because they hadn’t received the money they were owed. But it then emerged that Bernie Ecclestone was involved, because he was never paid for the team’s 1993 entry. With no means to enter the championship it spelt the end both of the Brabham Galmer team, and the dream of having Brabham back on the grid.

The fate and whereabouts of the two wealthy businessmen remains unknown to this day.

For more pics go to this link.

One thought on “Brabham Galmer, the failed attempt to revive Brabham”

Unraced projects of the 1965 season