Its a matter of time before the Dutch Grand Prix will be held 2019, 2020 or 2021. It is more the question on which circuit it will be. Both Circuit Zandvoort and TT-Circuit Assen have the capacity to host the Grand Prix. Rumours about stillborn circuit are arriving as well. Who will host the Dutch Grand Prix?

Maybe it is good to show you the history as well of the Motorsport in The Netherlands. One of the “First” races held was Paris-Amsterdam-Paris trial from 7 until 13th of July 1898. Of course, it is not really Motorsports as it was a trail race, but the interest was born by the Dutch people. Around 1898 more than thousand cars were registered on the road. I was unable to have in confirmed but articles noticed some kind of sprint races already held in 1897 or 1898. It has been too long ago to get it confirmed anyway.

Spyker was one of the first companies that made their name in the motorsports, before the First World War they raced with their cars on circuits. After the war, the Motorsport got a boost. During the 1920’s several concourses were held on boulevards for fancy people with fancy cars. Sprint racing was a common thing on these concourses. During these years the first plans were made for a permanent racing circuit in the Netherlands. The first known is Circuit ‘T Langeveld which I recently spent an article on.

More plans arrived for permanent circuits in The Netherlands in Heerlen, Den Haag and Arnhem. None of them leaved the design table. In 1939 the first official race was held in Zandvoort. On the 3th of June 1939, races were held on the street circuit of Zandvoort, which contained several corners and went through the centre of the city. Most spectacular was the demo run of Hans Stuck with his Union C Type car. In those days revolutionary with the design. 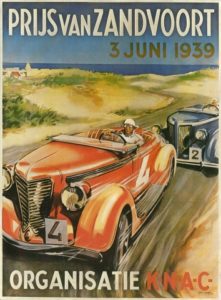 Some forgotten history is the fact that a second Dutch Grand Prix was planned on the 10th and 11th of August 1940 in Zandvoort as well. Because of the war the race never happened, no information can be found but probably the organisation would use the same layout as in 1939.

During the war the mayor of Zandvoort started with the construction of Circuit Zandvoort. He tricked the Germans by saying he was construction a parade road for Nazi Germany. By constructing the circuit he saved many people who would probably otherwise deported.  In 1946 the first races were held, and in 1948 the first official Dutch Grand Prix was organised. Between 1948 and 1985 Circuit Zandvoort was the circuit were the Dutch Grand Prix was held.

After 1985 the circuit lost its place on the calendar. The lack of attention for Formula One in The Netherlands these days, and the financial struggle the circuit was facing that time the Grand Prix disappeared. The local government decided to build holiday homes on parts of the ground they bought which was before a circuit. In 1999 the new circuit was opened, the layout is still the same. In 2000 Bernie Ecclestone, yes again Bernie in one of my articles, said that Zandvoort would be the perfect circuit to test Formula One cars. It was even possible to hold a Dutch Grand Prix again in the future. Sadly, no official tests with Formula One cars ever happened only demo runs. Not to forget to mention the Historic Grand Prix that’s held every year.

Speculated for years is a brand new sporting complex near Utrecht or Alkmaar with several racing tracks and sporting facilities. No concrete plans have even been published so far. Rotterdam appeared, as it hosted the Rotterdam City Racing for many years. Amsterdam and Den Haag said to be interested as well to host the race.

The change either Zandvoort or Assen will host the Grand Prix is much bigger. The circuits are already there and their management is experienced in hosting big events.  So what will be the best option? Well let me give my opinion… be alert my opinion is not a soft one.

If I would follow my heart, I would say Zandvoort should host the next Dutch Grand Prix. It was announced that new tracks on the Formula One calendar needed to be historical and popular. Zandvoort is one of these circuits with a lot of History. Moreover, is loved by fans, and by drivers. The atmosphere is most of the time mystic and relaxed. If you’re done you just go across the street and lay down on the beach.

However… Zandvoort is not the best choice to host the Dutch Grand Prix. While in the winter, a new asphalt layer was placed and some infrastructure improvements were made, and a couple of days the local government of Zandvoort agreed with an injection of million, the circuit is an old mess. Of course the new owner of the circuit is not really good.  Current owner, Prince Bernhard, is part of the royal family in The Netherlands and bought the circuit in 2016. In his speech he said he would bring back the glory days of the circuit, introduce multiple new race divisions and improve the entertainment level.

To be honest, as a paddock pass holder, he didn’t do anything so far. Except for higher the prices for food and drinks. It seems the purchase of the circuits is more an elite thing. The races that are currently held on it are from a poor quality, except the races held by the DNRT. The main tribune is in a poor health and the infrastructure such as toilets is horrible.  I loved the circuit 10 years ago. These days I dislike the circuit. As long Prince Bernhard is the current owner, I do not believe the Dutch Grand Prix will return to Zandvoort. Or massive investments have to be made to make a return possible.

The other circuit is TT-Circuit in Assen. Recently inspected by Charlie Whiting from the FIA, and his report was positive. Only some aspects on the circuit had to be changed to held a Dutch Grand Prix there.  The infrastructure is good, and earlier this year the circuit realised a massive tribune.  Some more improvements are pending on the track’s layout to make a bit wider for the Formula One cars.

Still it is an TT-Circuit and this will not change. Previously the DTCC, Formula Ford, Formula Renault and so on raced on the circuit. Still there are races held on the circuit. The management of the TT-Circuit already said they would not change the layout in prior for Formula One only slightly changes will be made. These plans were already approved by the Moto GP organisation and the FIA.
For me Assen is currently the favourite to hold the Dutch Grand Prix!

Did you know ? Dutch Special

Story of the unknown Arrows AMT A21